Presenting a few new family members of a confirmed second successful nest this year! One nest was on the beach and the other just across E. Cliff Drive, where sandbars from winter storms have provided new habitat. There was possibly another successful nest, but it and the newborns were so well camouflaged that photographs aren't available to confirm that one. 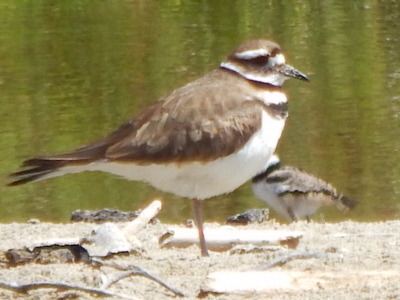 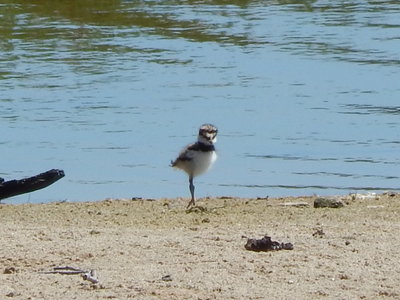 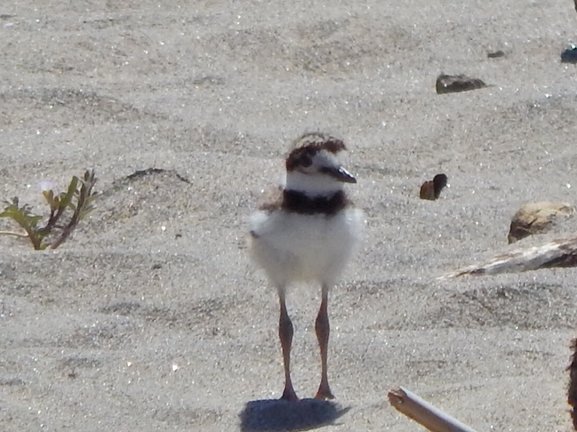 Report from an observer: "When the current pair (that we know about) were on the nest, I was often 'beeped' by a Killdeer up near the 23rd Ave exit. I figured it was probably a relative of the nesting pair because in previous years there seemed to be a family gathering just before the eggs were hatched. So I thought three Killdeer out there was nothing unusual. The chicks that were hatched in the protection have plenty of cover and I've only seen them amongst the logs or edge of water near the cordon.

"Now when I am walking from the cordon area up to the 23rd Ave exit, I still get 'beeped' by a Killdeer and haven't been able to figure out why the bird has been trying to get my attention. Last night, I was walking up East Cliff toward 23rd and a Killdeer beeped me. I walked up onto the beach and almost stepped on a few days old chick hiding in a small patch of vegetation. It took off running towards 23rd.

"There is the possibility that there are two Killdeer families on the beach. I won't know until I can definitely see at least two chicks in the logs and the same time see more chicks farther up the beach or see four adults acting protectively. Stay tuned."

Update from a FoCLB Observer
"I've only been able to see two chicks running around, both out close to the water. Both guarded closely by both parents. Tonight I stayed until sunset to determine if the Killdeer were still using the green protection. I don't expect them to.

"Two Hispanic women were out there, no English, but I showed them pics in my camera and indicated that I had taken the pics out there. As I was leaving the beach at 23rd, the two women exited over the wall half way between the portable toilet and 23rd. They yelled at me and came running towards me. They had picked up the third chick on sand beside the road, outside the wall. It was too weak to stand, struggling to do so. The parents had either lost it or given up on it. I took it to Native Animal Rescue (NAR). I took four hurried pictures, not focused very well, because I was trying to keep it warm. NAS fed it to help with dehydration. The wee bird was moving a lot but not standing up. Probably has not had water since it was hatched 2-1/2 days ago." 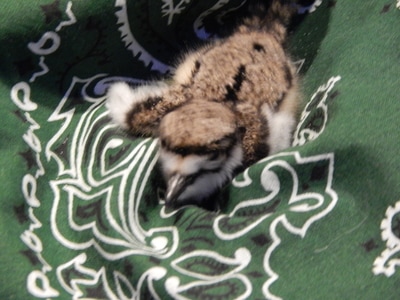 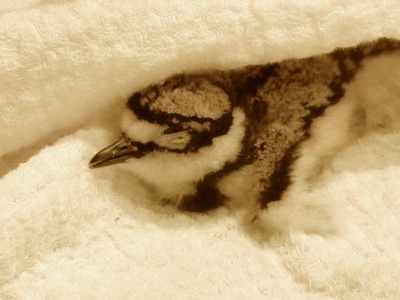 Observe how hard the chicks are to see in this photo, taken at 9:30 am.
Look carefully to see that both parents are in the picture. 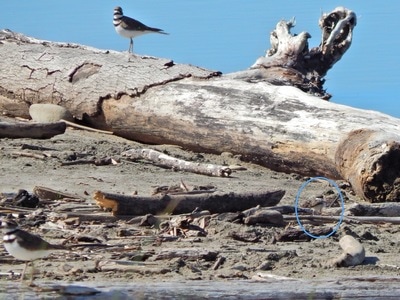 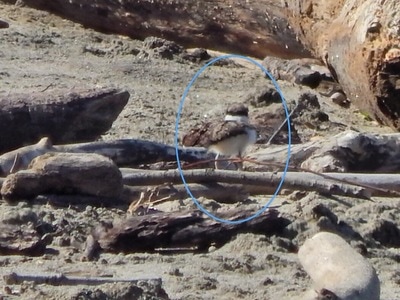 We have three hatchlings, pictured here about an hour and a quarter after hatching. Both Killdeer parents are working the beach, doing their birdie best to keep their babies safe. 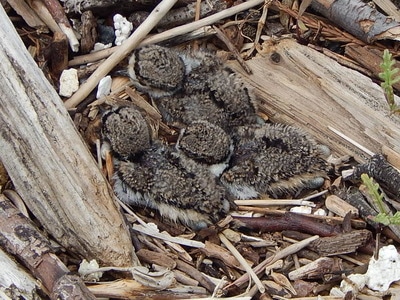 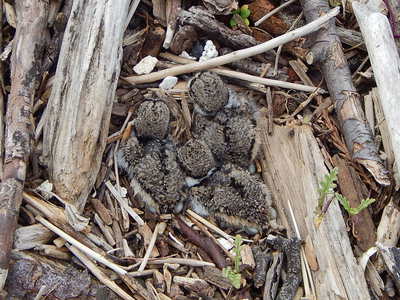 Only three of original four eggs seen in the nest today. One may have been taken by a predator. We're holding good thoughts for the remaining eggs to successfully hatch.

Killdeer parent performs classic broken wing behavior to call attention away from the nest (8:39 am). 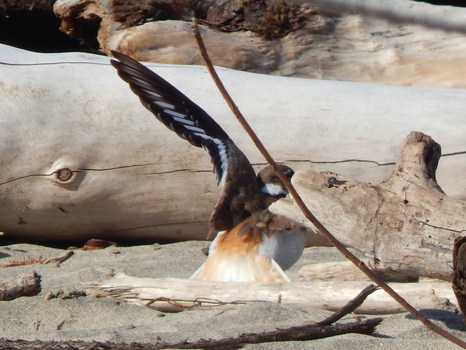 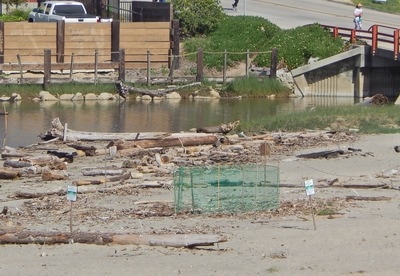 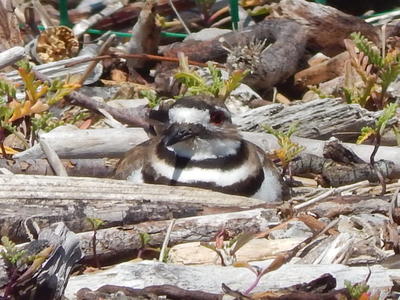 Lifting our spirits, after the earlier nest disappointment, a new nest was discovered on Corcoran Lagoon Beach, in the historic nesting area. Two eggs appeared on April 13. A third egg on April 14. The fourth egg on the 15th. 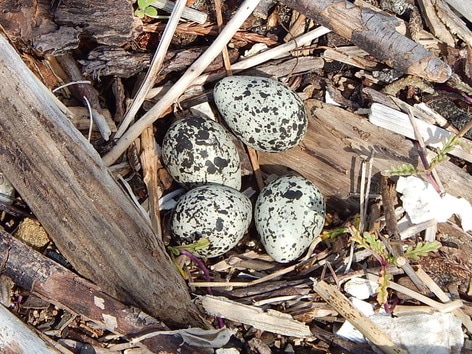 Unfortunately, the lagoon water level continued to rise.  On the morning of April 3rd both birds were away from the nest, which was now under water.  One egg was visible, the other three were under water.  The water was warm so the eggs were moved about 10 feet to higher ground. The birds didn't follow. Then the eggs were moved closer to the nest. No birds came back. After a few hours, it was obvious the eggs were abandoned.  They were taken to Native Animal Rescue where they were placed in an incubator and carefully monitored.  Alas, the eggs failed to hatch. 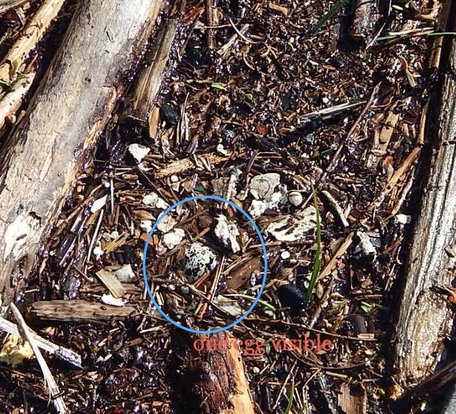 Four eggs in nest. During the evening of April 2nd, one of the Killdeer pair was close to the nest acting if (s)he was trying rearrange something. 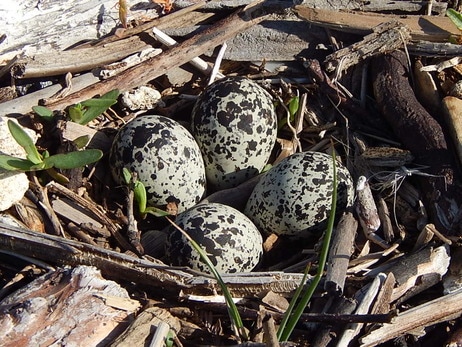 The first nest of this season was located about fifteen feet from East Cliff Drive in the inner lagoon. On April 1st the nest had four eggs. 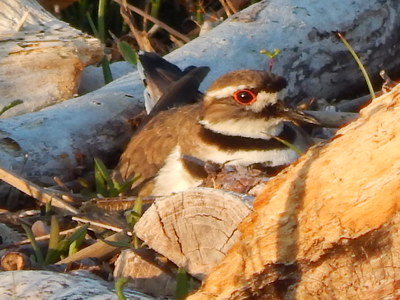 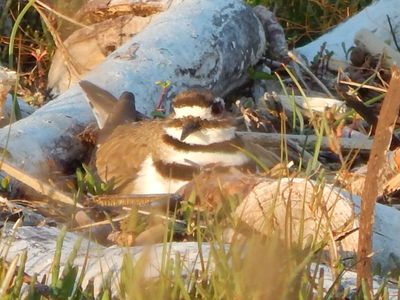 Four Killdeer (Charadrius vociferus) appear once again in February - to check out the traditional nesting site that they have used for years.  Notice the emerging native plant, Abronia umbellata.  The two seem to go together! 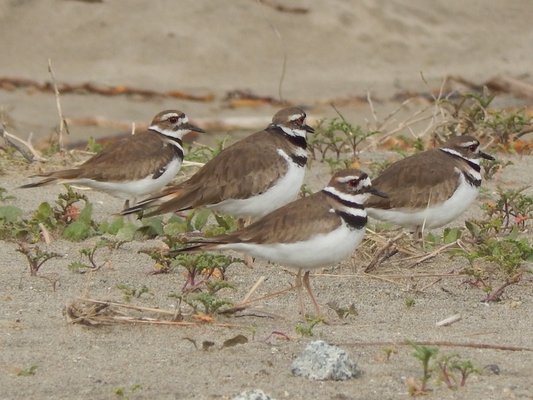