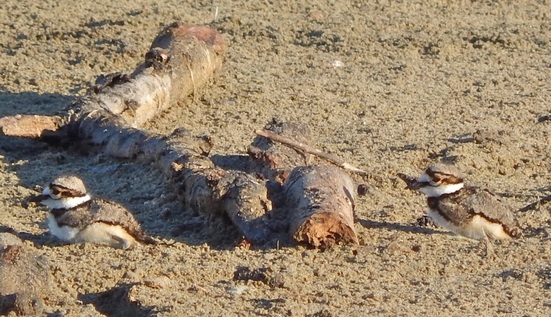 Pictures taken at 7:49 pm. Note that in the third picture that the parent is signalling to the other two chicks that have not arrived yet. There is already one bird under the parent, a part of it is showing. It appears that they sleep inside the cordon that delineates Shorebird Nesting Habitat. Four chicks still doing well. 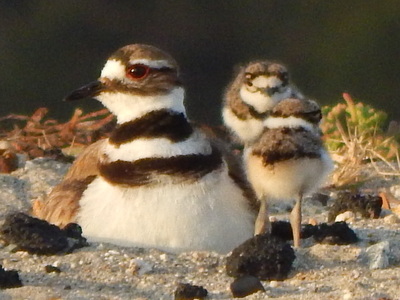 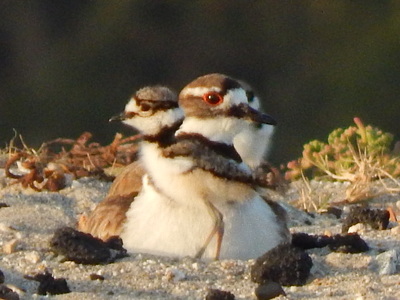 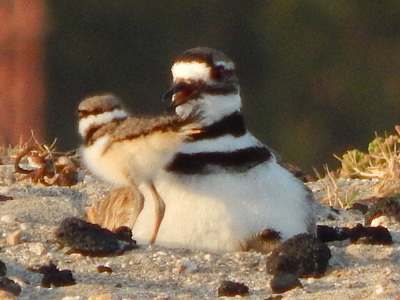 Four Killdeer chicks hatched June 9 and are exploring their habitat. 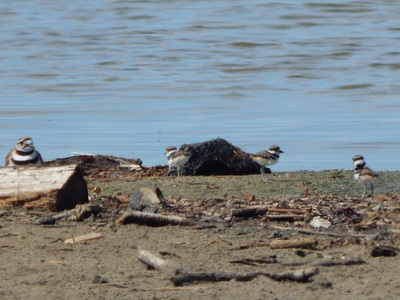 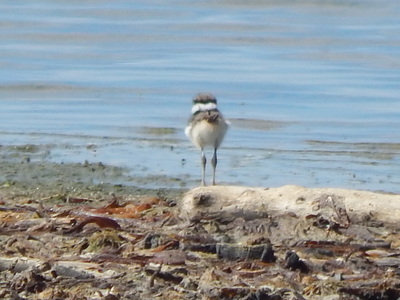 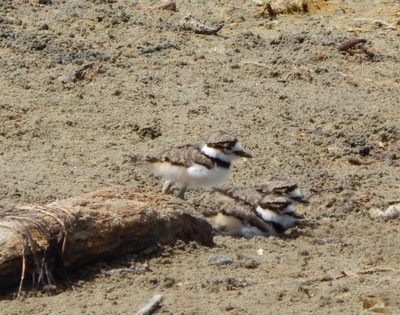 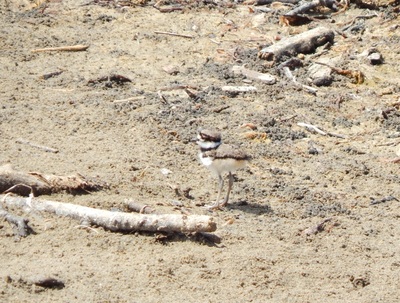 Killdeer continue to nest in their traditional nesting site on Corcoran Lagoon Beach.  They know where home is!  This bird is sitting on four eggs now.  Let's be sure to give her some peace and quiet for her nursery. 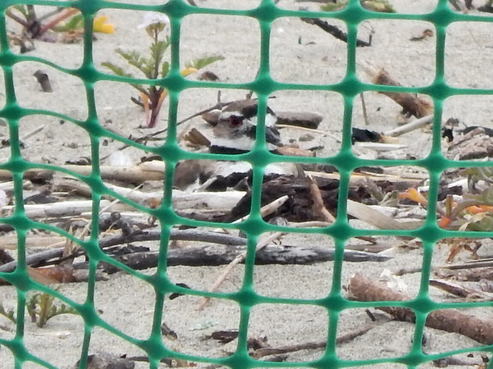 Four days old, blending into the scenery as they forage. 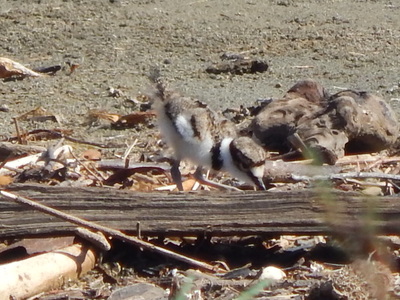 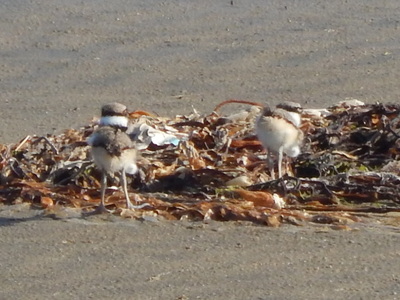 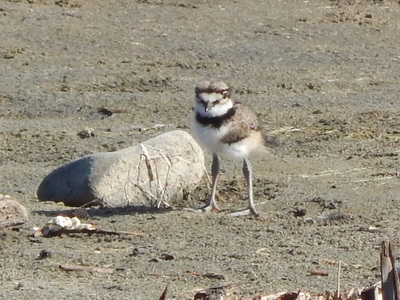 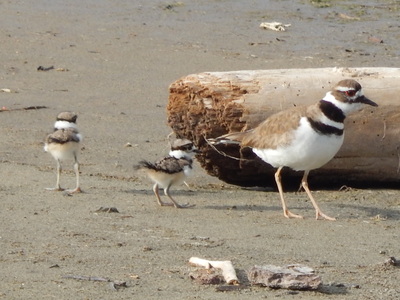 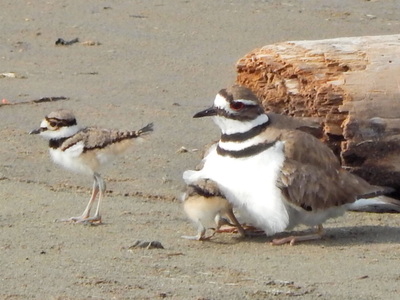 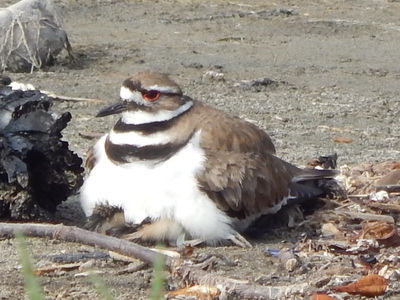 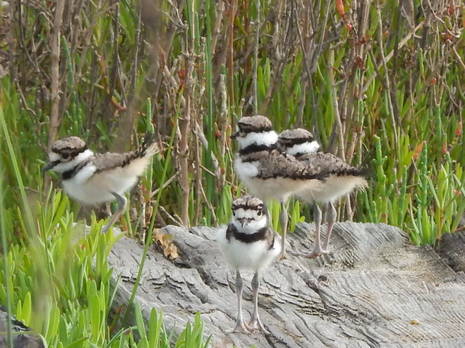 The eggs were first seen in a nest on March 16th.  The nest was tucked in amongst drift wood and we were worried about beach visitors scavenging for firewood (even though fires are prohibited on the beach).

On April 9th, as the parent Killdeer sensed imminent hatching activity it began communicating with unborn chicks.  At 3:54 pm two chicks are hatched and still wet.  The third chick in background has broken the shell but has not yet emerged. Shells of two eggs have been removed from nest.   One egg, right foreground is still intact.  At 4:37 pm three chicks are fully hatched and drying off.  The third egg shell has been removed from nest.  The parent was back on the nest at 5:08 pm, covering the newly hatched chicks. 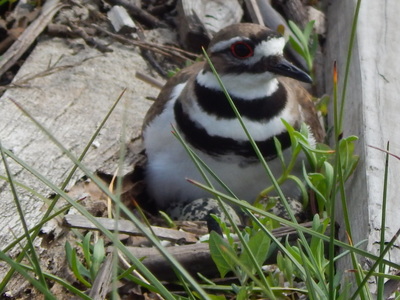 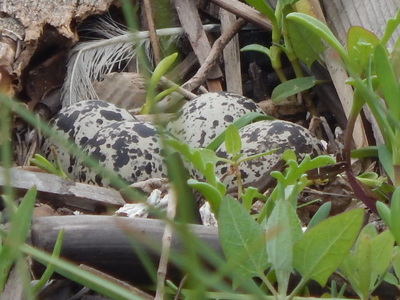 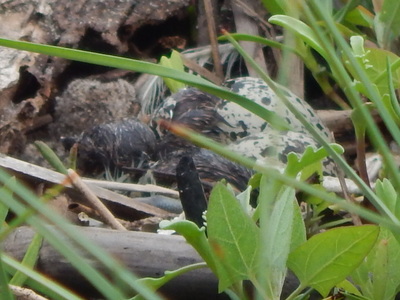 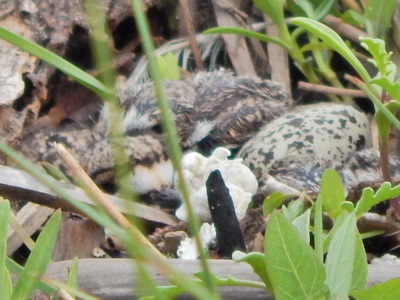 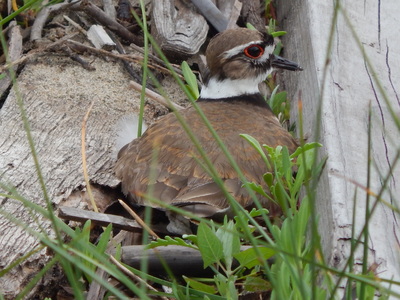 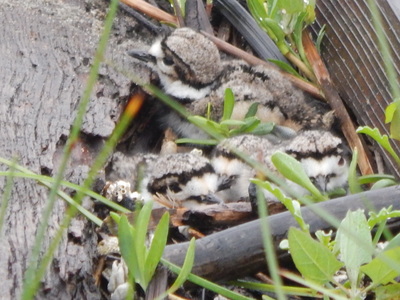 After seeing the sand and the new island in the inner lagoon, the Killdeer may nest there, perhaps skipping their historical nesting habitat just south of E. Cliff Dr.

Due to Pacific storms of January and March, their regular nesting area is just not as inviting.  Smart birds.  They were washed off their recently historical nesting area three times by storm waves.

Here are several pictures of the Killdeer who are scoping the nesting habitat at both Corcoran Lagoon Beach and just north of the beach in the inner lagoon area.   We'll update news as the season progresses. 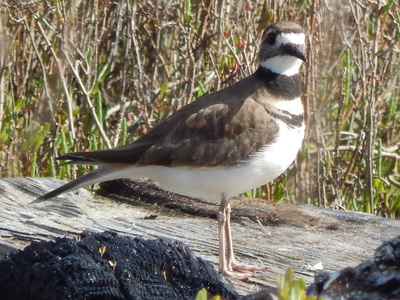 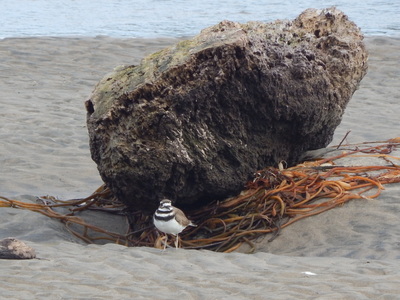 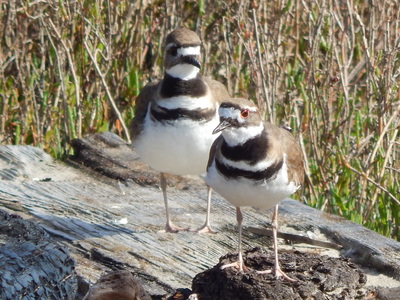 I saw three killdeer running around on the sand by the two clumps of grass this morning.  When I first approached all three were down in the gully by the K-rail and went running up as I got closer on East Cliff Drive.