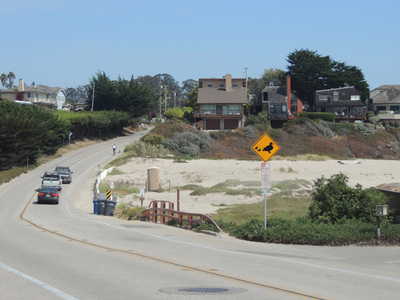 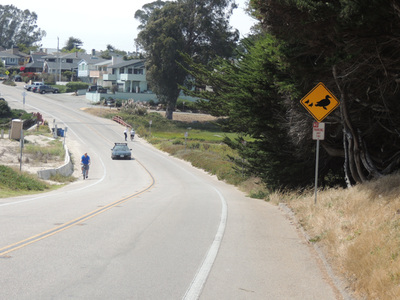 Two Duck Crossing signs on East Cliff Drive between Corcoran Lagoon and the beach, where ducks and other wildlife regularly cross the road, were installed on August 12th, thanks to the generous donations of many Supporters of Friends of Corcoran Lagoon Beach. We couldn't have done it without all of you!

The signs, costing $442 for manufacture and installation by County Public Works Department, will save birds and maybe even slow traffic.

All nearby ducks and lots of other birds thank you from their feathered hearts.

Ducks are being killed on the stretch of East Cliff Drive between 21st Avenue and 23rd Avenue. There are “Duck Crossing” signs in place — donated by Friends of Corcoran Lagoon — but drivers ignore the signs and speed down the dip at Corcoran Lagoon. The past week (March 8- 14, 2015) there have been two female ducks hit by cars. This is nesting season and the mallards are searching for nesting sites on both sides of the roadway at Corcoran Lagoon. Ducks are not able to quickly maneuver away from speeding cars. Please, caution drivers to be alert for ducks.

Thank you so much for raising this awareness for driving safe around ducks. Street Smarts checked in with the CHP’s officer Brad Sadek about traffic laws in regard to striking wildlife.

“There is no section in the vehicle code we could site for hitting the ducks, unfortunately,” he said. “However, they could be cited for their unsafe speed.”